Third parties place cookies on this site, and that activity is beyond our control.  Please be aware.  Thanks.
Posted by Carol Widing at 4:36 PM No comments: 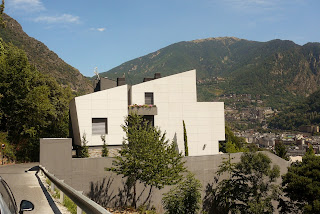 
Andorra is a modern co-principality governed by "Princes" -- the President of France, and the Bishop of Urgell, Spain (Catholic).  The ancient and the modern homes and other architecture juxtaposed with the ancient churches, show it can work -- at least on a small scale, and where all seem to agree on the sytem.  The modern houses seem to set apart the status of the well-to-do, but how to determine incomes from architecture?  Can't be done; Still, there are financial benefits of living and working in and for a tax haven, good employment for the financial wizards ducking and weaving through the undergrowth that traps the rest of us.  Andorra modern homes house those who whiz by the rules?  Corporate presence:  Drive in the town, and see lots of major corporation signs, like Hertz, in little windows of little buildings all closed up (was it a holiday? don't think so), keeping their presence if not much activity alive.

Residential neighborhoods are a mix of traditional and some (far less) modern, and snake up the cliffsides, hairpinning with the main development far below, in the valleys.

This area was part of the "March" estates, where Charlemagne needed buffers against the Moors invading from Spain.  Those who provided that service were rewarded with charters, verifying their independent status, a privilege for ownership of land.  As a mere privilege, not a right, could it be withdrawn?  Most charters listed the rights that were granted, but it is not clear if those also were still a privilege that the overlord could withdraw?

Apparently the uneasy but workable arrangement in Andorra, a power-sharing between the secular and the theological rulers with (it looks like) alternating annual rights of last say, kept going long enough that it was not challenged, either nearer its early times to now. See History of Andorra at http://www.historyofnations.net/europe/andorra.html.  The after-you-Alphonse of the Count of Foix, the French, and the Bishop of Seu d'Urgell, the Spanish, morphed into a system of elections now, with a Constitution passed in 1993. 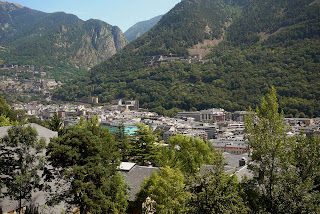 Andorra la Vella, down in the valley

Posted by Carol Widing at 5:56 PM No comments:

In this remote Pyrenees mountain area, stone is the building material of choice and convenience. Traditional neighborhoods wend up the sides of the hills and mountains, the main town in the valley with no place to go.  Older homes have wooden lintels, windowframes, and the year of construction at one side often.  This home, Number 39, relatively new, was built in 1718.  Look closely there on the right, beneath the lintel. 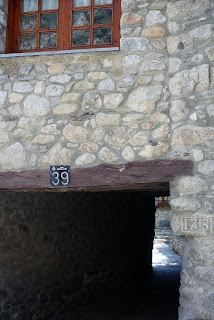 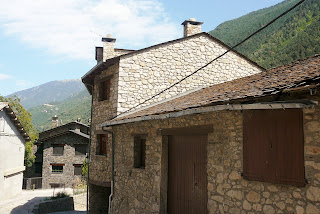 Homes are sensibly packed together to maximize the number of people that can be accommodated, some ancient entries with doorways below street level by now, some with angled roofs to deflect snow, or cap a traditional gate at the street. 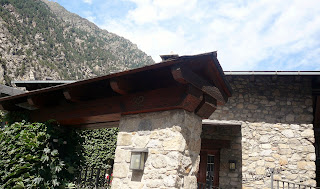 Andorra, residence capped gateway, detached
bb
In other places, like Romania, capped elaborate gateways at streetside, with the house at a distance behind, were to block evil spirits from entering, a bit of luck to keep them out.

Park, twist through the alleyways, aiming for the tower, looking for Santa Coloma.  Most parking is limited to lots set aside, but some lucky homeowners have space beside the house.  Get used to leaving your car, vulnerable, and we found the only problem in all these years was theft in the Blarney Castle parking lot in Ireland.
Posted by Carol Widing at 8:44 AM No comments:


The official website does not address when the porch covered area might have been added, but it does not appear original.  It may have been added to protect the original wall, where wooden beams reinforce the stone and whatever the plastering material is.  Need more research. 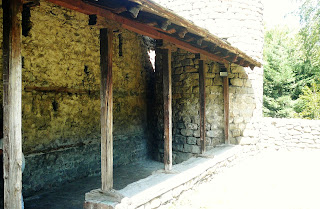 The wooden beam, or courser, would have been difficult to replace.  Perhaps it only survived because of the protection of the porch roof?

The windows are tiny, perhaps to serve the defense needs of this remote location.

The original people here may have been Basque. There are traces of Celts, Iberians (some say these relate to very early Hebrew roots, migration to the Caucasus, and westward.  The language is not Indo-European, see start at http://www.britannica.com/EBchecked/topic/280571/Iberian; and interesting takes at http://www.hebrewrootssc.com/The-Lost-Tribes.html), and something called Andosinos here as well.  See Google book, One Europe, many nations: a historical dictionary of European national groups.

That site's wording is reflected at other sites. The area was part of the Roman Empire, and when the Empire fell, invaders such as tribal Alans, Visigoths and Vandals, bent for Spain, passed through and some probably stayed.  See Andorra history at http://www.medinnus.com/andorra/history.html

Then came the Moors, sending the lowland occupants, including Christian peasants, of both France and Spain into the mountains. 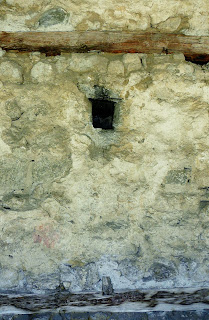 The entry arch is detached and at a distance from the main church.  The tower was added later, in the 12th Century, see andorra.ad site, and again seems to serve a defense purpose as well.  Tiny apertures at ground level, broader -- even enabling projectiles and arrows? and for observation - above. 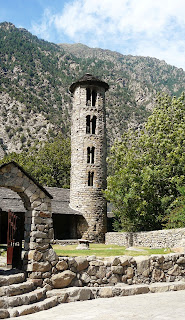 The church is deep in the valley.  Could someone please date the porch columns and roof material, also wooden? 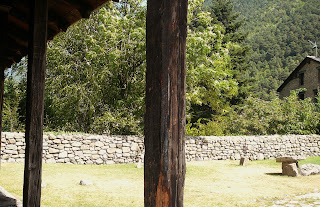 This wooden beam in the wall does not extend the full length.  Did a tourist stick in the obstruction under this peephole? 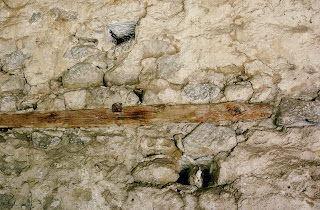 Enter the church and look down and back out:  The old stone threshold area looks original, the door opening to the outside very new. 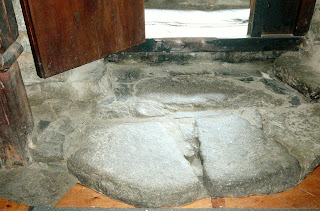 Posted by Carol Widing at 11:14 AM No comments: 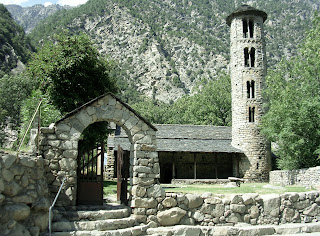 Andorra is a tiny country, a democratic blend with Princes, between France and Spain in the Pyrenees. Catalan is spoken among the some 70,000 residents. Orthodox Christianity took hold here in earliest times, and has retained that character ever so faintly still, despite influences of later France and Spain to substitute those areas' determination to convert these Orthodox to Roman Catholicism. Santa Coloma was a martyr, and this church was built in the 800's. Sources generally: History of Andorra - http://orthodoxengland.org.uk/oeandorra.htm

The main city is Andorra la Vella, where this old church is located and, as befits stone and isolation, well preserved.

1.  Santa Coloma was a nun at Tabanos monastery, beheaded by the Moors for her religious beliefs in 853, according to some.  Christians retrieved her body from the river Guadalquiver.  Relics remain in Old Castile.  See http://www.bartleby.com/210/9/172.html.

But is this aother St. Columba, who is said to have died in 258 or 273?  See http://www.bartleby.com/210/12/312.html.  That site says the Huguenots, reformers, scattered her relics. Look up Wikipedia at St. Columba of Sens to find a collection of folklore, that always should be preserved for whatever true nuggets may lie within, that she was a witch before converting; and that she was killed for her resisting rape.  http://en.wikipedia.org/wiki/Columba_of_Sens

2.  Another Saint Columba was Colm or Columcille, a male, Celtic Christianity era, see http://www.cbrundage.net/saints/columba.htm
Posted by Carol Widing at 12:22 PM No comments: